What is interesting about that picture are the three "lights" floating over my head.

The photo was taken on a film camera, most likely my Nikon F2, and film cameras do get static discharges on the film that show up as lights; however, they are very rare, in fact, in all the photos on all my web sites, I never got these static events (I took about all the photos on this site and in the Class Yearbook). 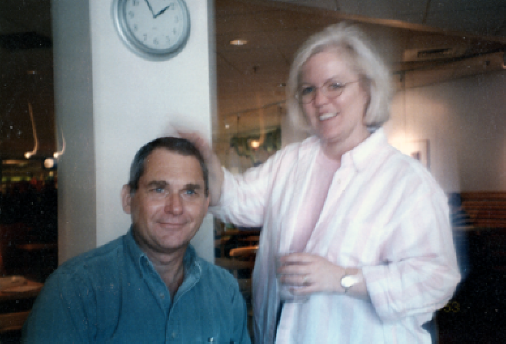 Not just the rare nature of these, but there are three... THREE, as in Father, Son and Holy Spirit. Now, you can see these, and they were not put there by me, but what you cannot see is that right as she finished the baptism, I heard this roaring sound on my right. It was so dramatic that I reflexively jerked my head away and said, "Wow, did you guys hear that?" Nobody heard it but me.

I have no doubt that those lights on the picture are very much a sign of the Trinity. He seems to hear me, and He always guides me. 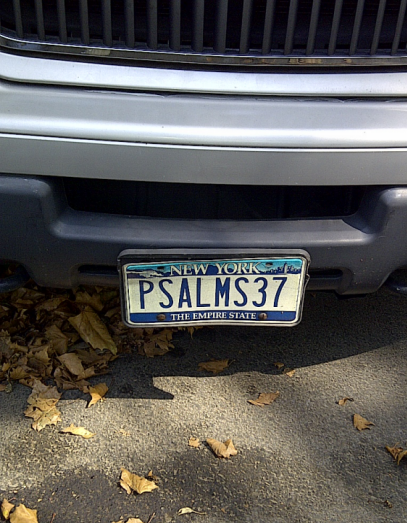 Years after this, during the divorce, I was walking Mop and Ruf, and I was very upset over some nonsense her lawyer was trying to do. I remember my exact words, "Lord, tell me what I am to do!"

Now, we were walking down Rugby Road, which goes by our street (Wellington Court) and is purely residential street and does not go anywhere that draws much traffic. I looked down at the license plate on a SUV that we were walking by and saw what is in the photo to the left. This is absolutely not Photoshopped, other than to clean up the color, brightness and contrast. I never saw a plate with a Scriptural reference before. Not long after this, in the usual funk over the divorce and not being able to see my daughter Katie, I was walking the dogs on the other side of Rugby, and as we passed by a couple of parked cars my first thoughts were, Wow, they're parked close, wonder how the guy is going to get out of that spot.

Then I did the classic double-take, because what I saw was this: 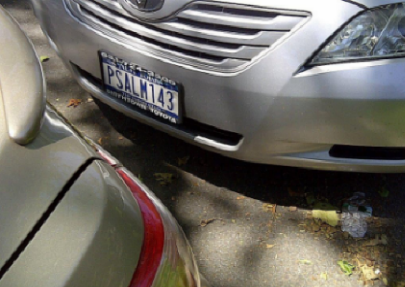 Now these two events were within about three or four months of each other, back in 2011 or so, when the divorce was going really badly. I never saw such plates before in my life, and in the past eight years I have never seen them again. Cars that are parked in our neighborhood usually belong to people who live here, and I have shown these pictures to some neighbors and nobody knows whose cars they are.

By the way, Psalm 37 begins: Fret not thyself over evil-doers...

That was the reassurance I needed at the time, and still do. What I have written here is all fact, no photos were modified other than correcting the color and/or brightness and contrast.

On one of our weekends together, not too long ago, Katie asked me, "How do we know God hears us, Daddy?"